“Climb mountains not so the world can see you, but so you can see the World” — by someone who reached the top 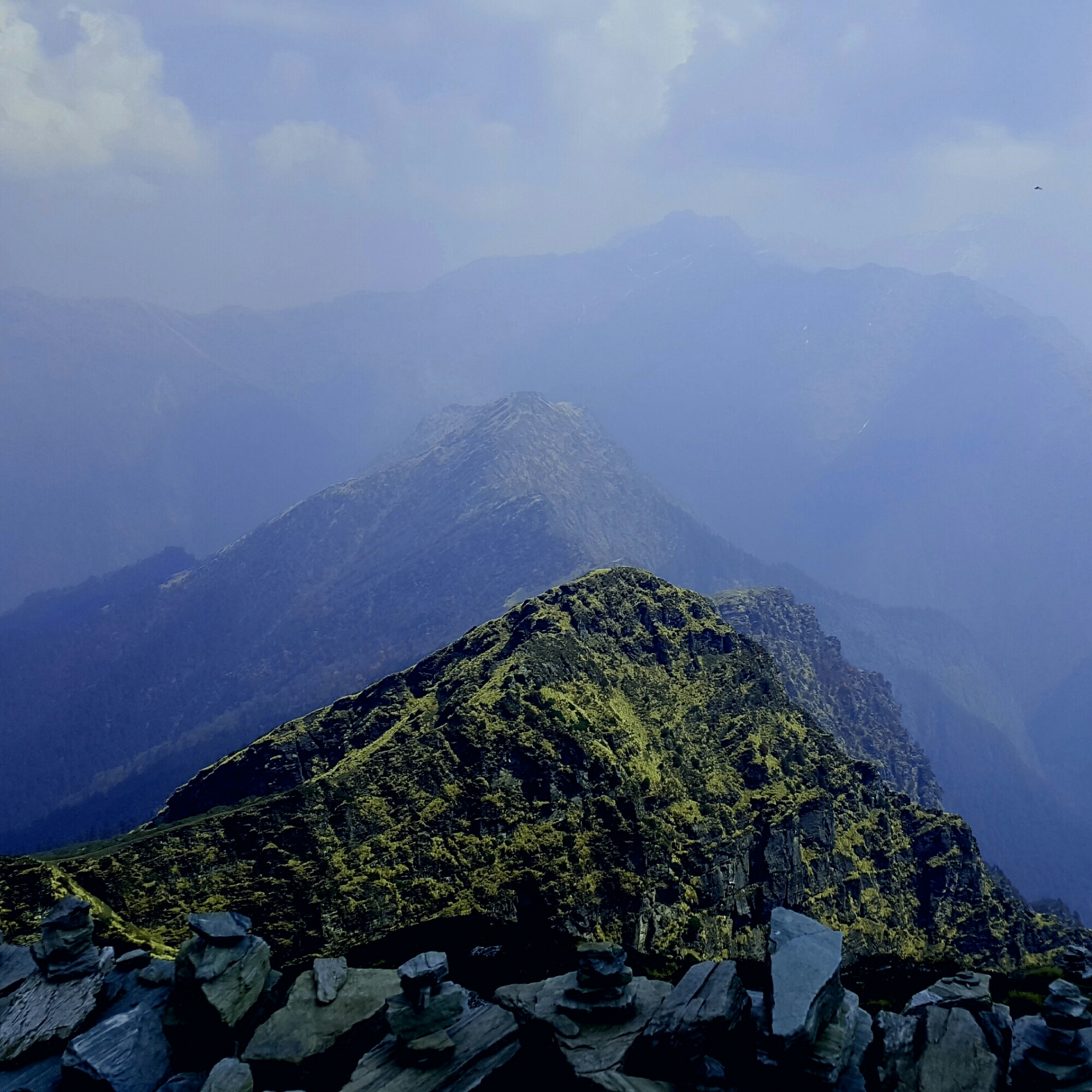 Nearly two months after my trek to Triund, I again had that niggling impulse to find my way into the lap of the himalayas once more. So this time I decided it was time for a bit more adventure. After doing some research I decided to go to Chandrashila peak via Deoria Tal which was an apt weekend getaway from Delhi. All I needed was 3 days . After some thought decided it’s high time I travel like a pro, so off i went to a Decatlon store in GIP bought a Quechua Quickhiker tent and a sleeping bag. My initial plan was to travel solo but considering my 1st camping trek I backed out and convinced a friend to go along. So finally I packed my bag with tent, sleeping bag some clothes and first aid kit and decided to go off for my very first camping trek.
The first day I had booked a bus from Kashmiri gate ISBT to Haridwar departing at 11pm. The trip started on a very sour note as the condition of the bus was so pathetic and we felt like we were cheated. A word of advice if you travel to Haridwar try booking the state roadways AC buses.

We reached Haridwar around 5 am in the morning and immediately caught a private bus leaving for Rudraprayag. As our luck would have it , the bus waited for another one and a half hour before it finally departed. I must tell you though travelling by state buses in Uttrakhand has it’s own sense of adventure but it’s surely not for the weak hearted. The bus drivers are often under the impression that they are driving a Ferrari and the pessengers are always on the edge. Being the only child of my parents I was praying that I make it out alive. Thanks to the almighty we reached Rudraprayag ‘safely’ around 1 pm in just 6 hours and caught a bus to our next destination Ukhimath, 40 kms away. The trek to Deoria Tal starts from Sari village which is 10kms from Ukhimath. I had already contacted a local before the trip, this local was a nice gentleman named Bhawani ji, who had a nice eating joint at Deoria Tal. From Ukhimath he was our guide. We hired a Bolero and went all the way to Sari, a beautiful village surrounded by the hills. Bhawani ji was kind enough to take us to his home and his wife prepared a nice tea for us. The people from hills are really very simple and always helpful. Finally around 6pm we set out for our trek to Deoria Tal along with Bhawani ji who took us from an alternate route used by the locals.
Deoria tal is a 3km trail from Sari village at a height of around 2700m and is a little steep. The trek is easy unless you are carrying a 10kg bag along with you like I was. But it is a fairly simple trek with the route carved by stone. There is an interesting legend behind Deoria Tal . This was the place where the pandavas had encountered Yaksha during exile when they were thirsty. We completed the trek quickly in one hour and reached Deoria Tal before dawn. The moment we reached there, our eyes were wide open , we were met with an enchanting view. The gentle breeze ruffling my hairs and there in front of me lush green meadows surrounded by dense trees and in the middle a calm lake enough to take your breath away. At night, even with half moon you could feel the traquility near the lake.
You can find lots of people camping at Deoria tal and food is also not a problem as there are few shops where you can have Maggi and Dal chawal.
In case you plan to go to deoria tal and need help you can contact Mr. Bhawani there – 08057112267 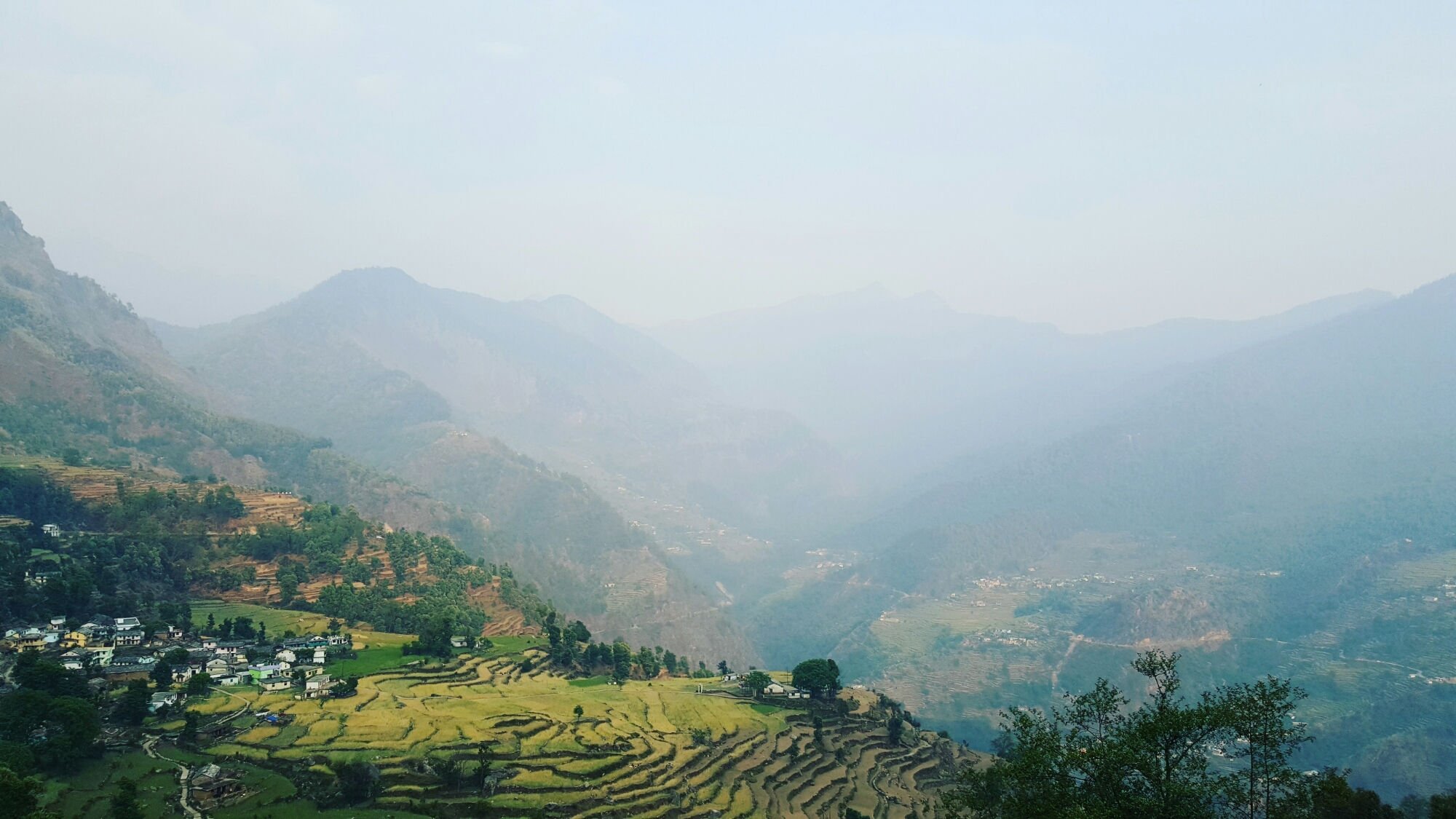 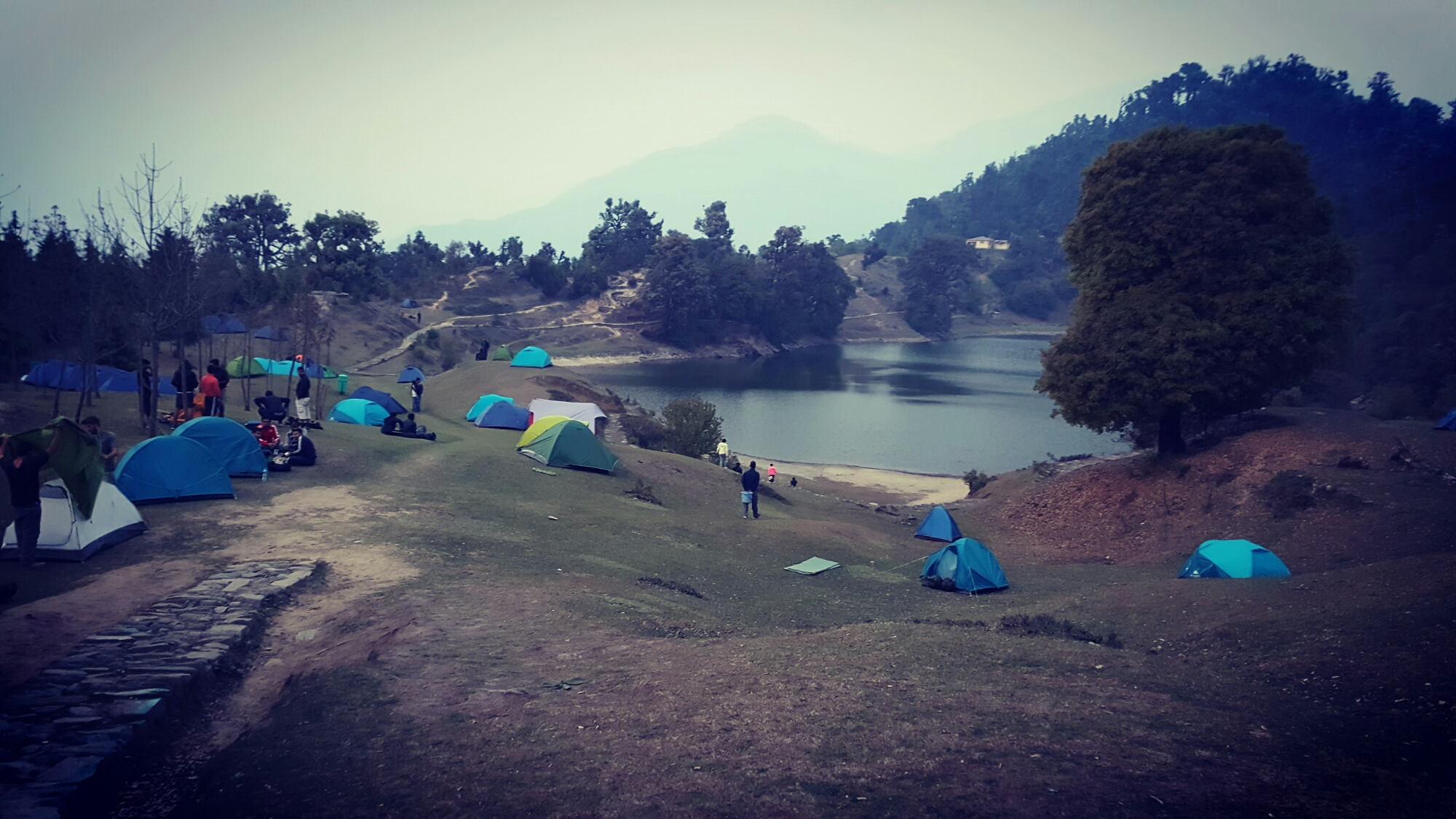 The next I got up early morning to see the sunrise and snow covered peaks but unfortunately the clouds had something else planned. So we packed up our tent and headed off to breakfast having nice Alu Parathas. We needed energy preparing for the long day ahead. Our next destination was Chopta, a 15 kms trek from Deoria Tal through the middle of a dense forest. Though one can also reach Chopta via road , it is hardly 1 hours or may be less from Sari. On the way to Chopta we would also encounter the lush green meadows of Rohini Bugyal. We started our trek for chopta around 8 following a group headed that way. We were told it is not safe to venture out there alone as one could easily get lost in different trails. The first 2 kms of the trek were very steep and took us onto the top of a mountain. The view there was splended. You could spot snow covered peaks easily. But the most mesmerizing moment was the eagles soaring beneath us. It was magnificient , large eagles flapping their wings and flying as if they were the lords. I wish I had a hippogrif like in harrypotter novel and could ride it and fly away.
After that it was a tough trek we went down and crossed a hill only to trek up again through the forest . On the way we came across beautiful meadows of Rohini Bugyal. But on the whole the trek was long and a little frustrating as you kept climbing up only to go down again. With a heavy 10kg bag behind I was just hoping for Chopta to come quickly. Better carry atleast two water bottles for you as you wont get any water untill 10 kms of the trek. At 3 we finally reached Chopta and parked our tent there. Chopta is a very small town with only a few shops and no electricity. So better bring power bank to charge your mobiles. At night it gets extremely cold there. As you wont be able to find any ATMs after Ukimath so do bring some cash along with you. 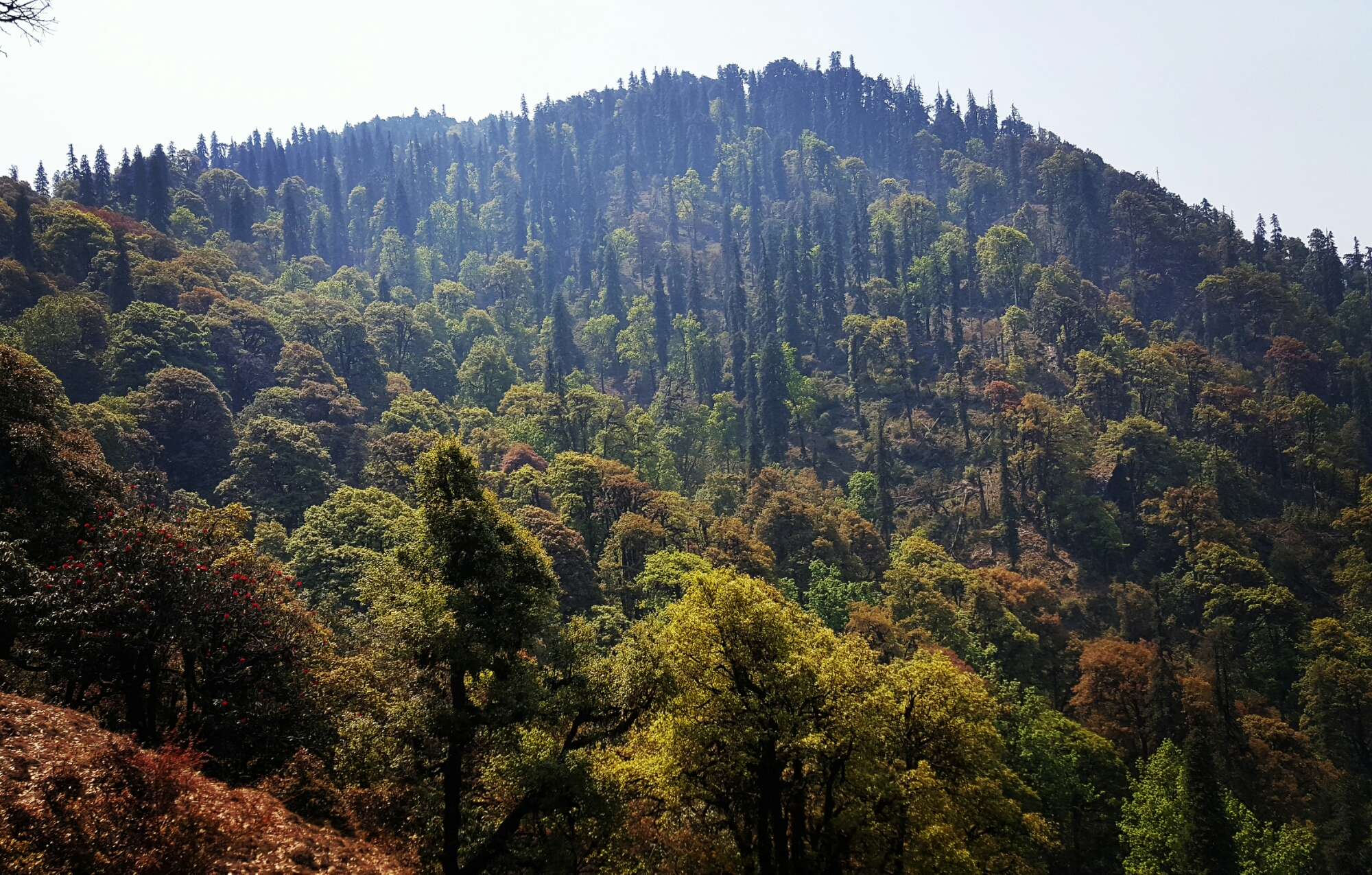 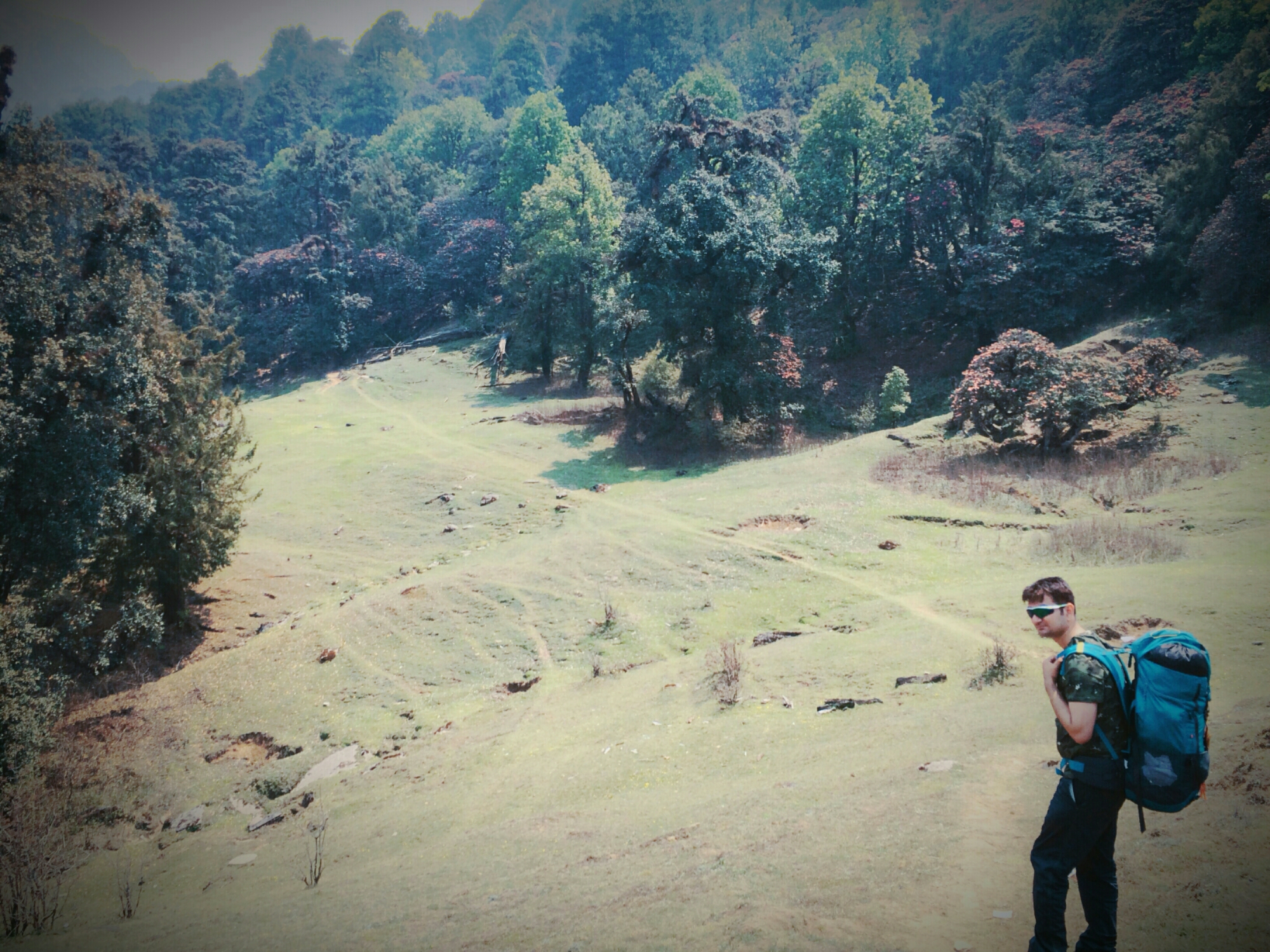 Finally, the last trek to Tungnath and Chandrashila peak. Early morning we kept our bags in shops and decided to walk towards our final path. A steep 4 km trek to Tungnath and a further 1 km climb to Chandrashila peak. Tungnath is the highest shiva temple in the world built around the 8th centuary AD. The trek to tungnath is very steep as we ascent from 2800m to 3400m. There is proper trail till tungnath with the path paved of stone and you can find many trekkers along the way. The path is serene and the views are stunning with meadows on one side and mountains on another. It would take 2 to 3 hours for an average person to reach Tungnath that is if you do not take long breaks in between. Shops can be found easily on the way. Once we reached Tungnath and worshipped the beautiful temple on top of the mountain , we set out for chandrashila peak. As one can say in hindi it’s a 1km ” khadi chadahi” but once you reach the top it’s worth every bit of it. The enthralling feeling that you get at the top is unmatched. The calm cold breeze that touches your soul clenses it and makes it pure. This is the tallest peaks around 4000m and every other peak is drawfed by it. Here you are truely at the top of the world. At the end I must say :

“The mountains are calling and I must go ” 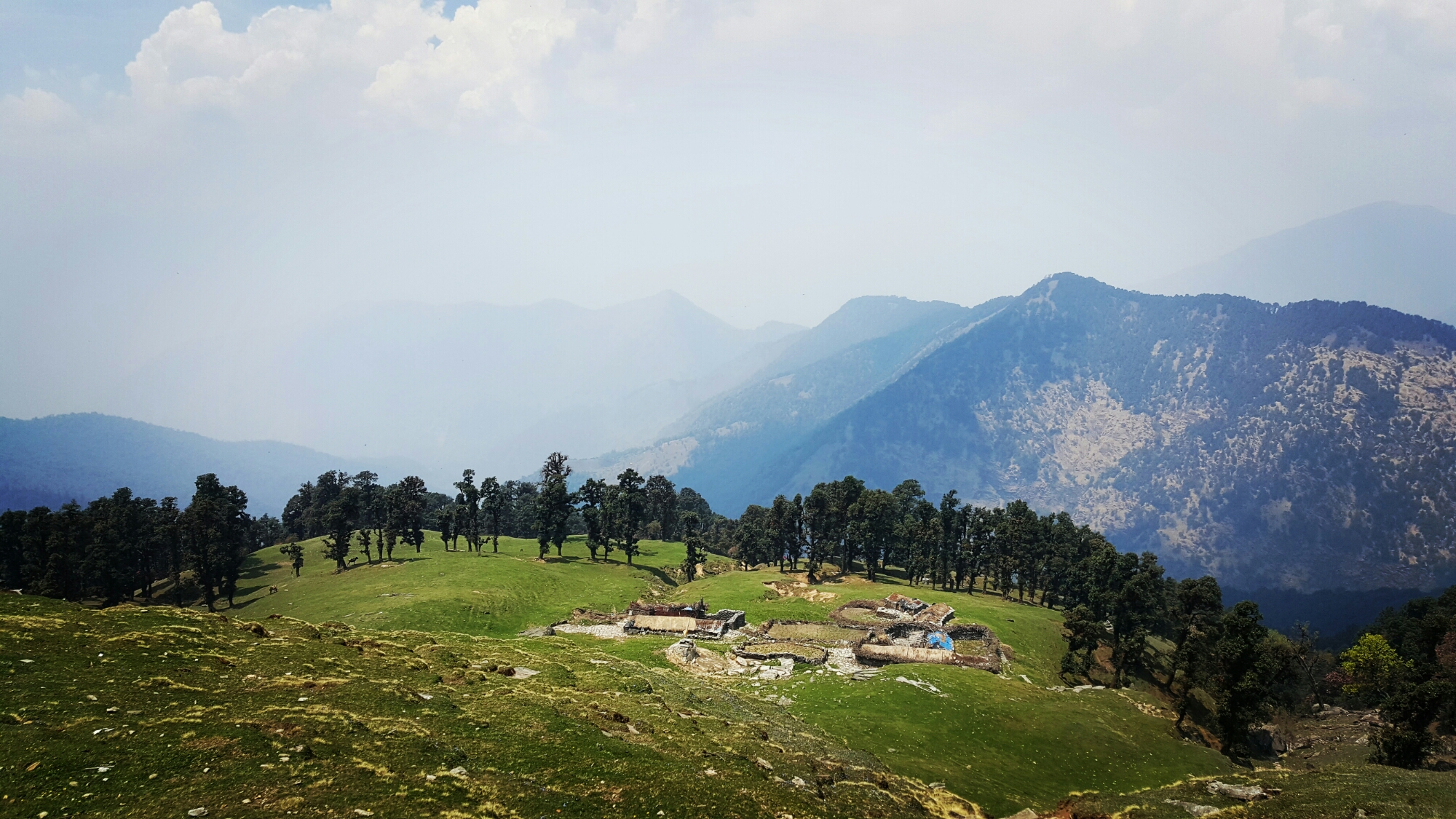 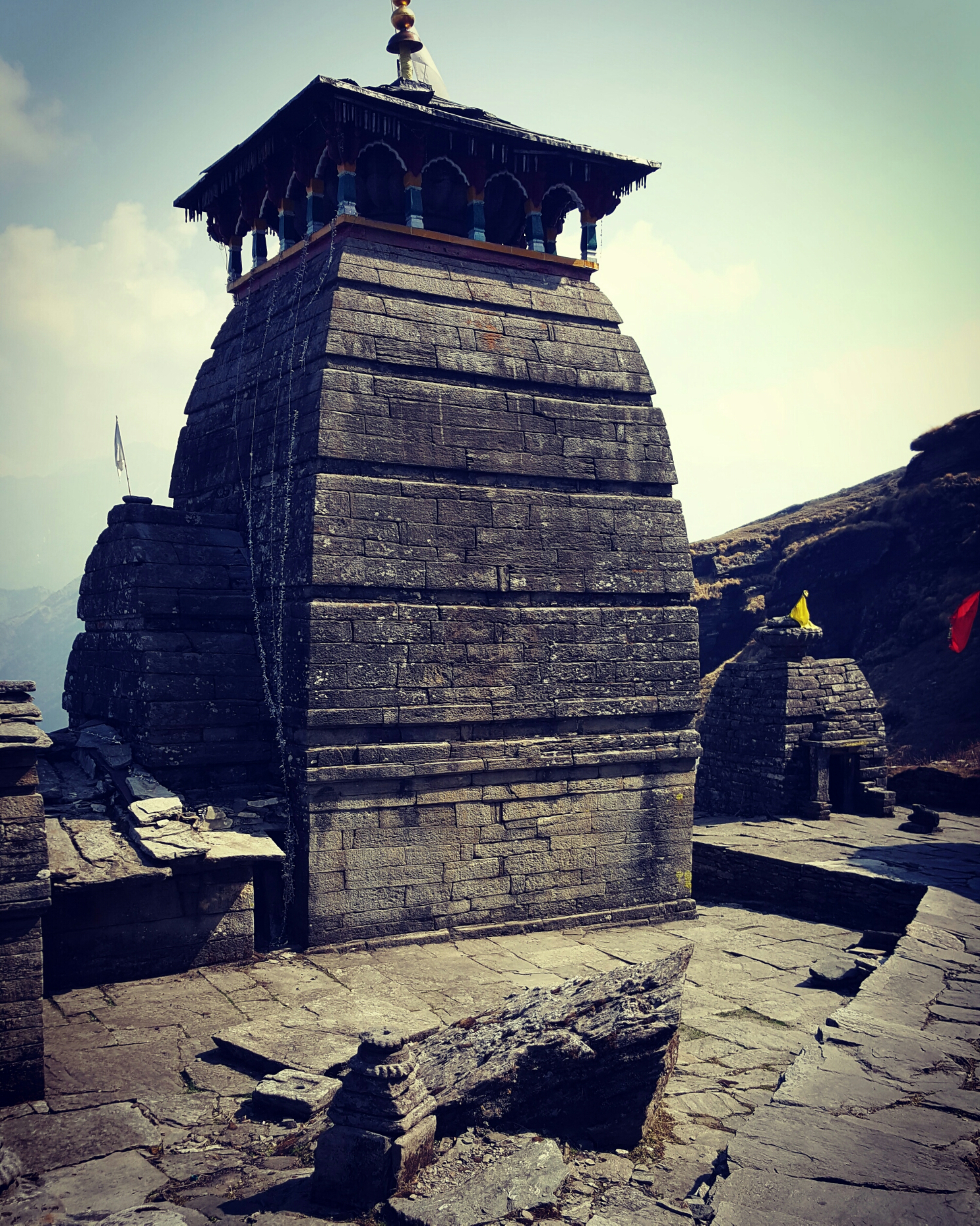 PS: Kindly avoid throwing plastic bottles and wrappers on the way when you trek. As a nature lover it hurts when I see people spoiling nature rather then preserving it.

2 Replies to “That feeling at the Top! Chandrashila God’s Abode”