By now everyone who is a traveller (not tourist :P) knows the place to be in Manali. Now Manali isn’t the hill station where you can look to find peace, buzzing with people and swarming with unimaginable traffic, which seems like a big turn off the moment you enter the city.  If you’re a young traveller I’m sure the things that come into your mind when when thinking of Manali are Rohtang Pass, or maybe getting high in Kasol nearby or honeymoon(if not yours then maybe someone else’s :P) . But Manali is not just about couples holding hands, easy weed , or riding your Bullet to Rohtang ; with Different cultures mingling , some authentic cafes and nice food makes Old manali is a traveller’s paradise. 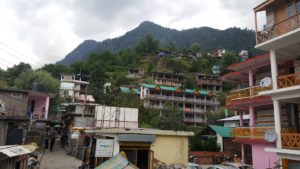 For me the best part of travelling is meeting strangers, striking conversations, exploring the city with them and getting to know the beats of the place. So when I was travelling and decided to spend a day in Manali, the only thing I had planned was my stay at this hostel called Zostel. If one is travelling alone there is no better place to stay than at hostels. Not only are they economical but also the best place to make new friends , chill out and explore city. Now after getting off the bus I had to walk more than 5 kms through Mall road & old manali to eventually find my way to Zostel (These guys need to put more placards ). On the way you’ll find how the demography how Manali changes entering into Manali it’s full of local tourists, then as you go up you’ll find more and more foreign travellers up in old Manali, most of them from Israel carrying heavy bags as if they have decided to settle here for the rest of their lives. Trust me the best way to get the feel of a hill station is to walk everywhere, that is the best way to feel the rhythm of a place.  So my stay is Zostel was a very fruitful one, the host Bharat was jolly guy always ready to help people and with a bagful of stories. With him was a pretty Brazilian traveller Kali (her Indian name) , who had been in India for last 2 years and was in love with India more than I am with my country. Just like every traveller she had her story, she learned Yoga in Rishikesh and was now teaching Yoga. There were many Europeans there in the hostel some of them planning to go to Spiti. Now there was this one crazy guy from Norway who rode his bicycle all the way from Norway to India. Where do People get these ideas from? I was not even ready to trust the paragliding guys here and we have people doing  such crazy shit. Also I met a recent college passout Raghav here on his first solo travel and pretty upbeat about it, along with our dutch friend we had good discussion on Namo. The overseas visits of our PM are seriously paying off it seems :P.

So I decided to head out for a stroll , and came across a nice cafe Dragon In, chilling there for few hours I decided to explore the street. There are lots of cafe’s in Old Manali , full of travellers .If you happen to be there do not miss Cafe 1947 or Drifters Inn.  In the evening along with my new friend Raghav I ended my in Shesh Besh cafe , where some stunning live music was being played by this awesome rock band name Rudra. They were playing some Himachal folk songs along with few jal songs. But the whole ambience made it mesmerising. There is something about music (especially rock) and mountains, they both seem to get the best out of each other. The night just couldn’t have been better. 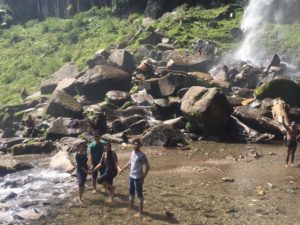 The next day I met another set of travellers , a college student from Gujarat, Punit, also travelling solo for the first time having already travelled through Shimla. I also met two  girls Shelly and Ayushi from Delhi and after some conversation, the four of us decided to see Jogini falls walking through bushes, crossing wooden bridges and climbing through rocks, feeling the cool breeze near the river & the blazing sun on top of our heads .Well the hikes are usually more pleasant if you have beautiful company.  It was a fun filled experience with my new friends giving great company and somehow managing to reach Jogini falls despite all odds :P. Again we managed to make more friends and came across few cool young professors who had managed to escape the Delhi heat and were looking to chill. It was an eventful and after a week I can still feel the hangover. Now looking forward to my next destination.